Can your phone save your life? The short and easy answer is, you guessed it: Yes.

The real answer is: Yes, but your life will be saved only if you take 30 seconds now to make it happen. Or maybe it will take two minutes. But honestly, it’s a teensy bit of time compared to the payoff.

Phones come with a free app (iPhone) or a specific setting (Android) where you can keep your health information and emergency contact number — if you enter it. First responders and hospital workers all know where to look, and they can get to it even when your phone is locked. Maybe you already have an emergency name and number in your contacts, but that won’t be of much help if your phone is locked.

Hear me out, whether you’re young and healthy, not so young, reasonably healthy, or you have concern for someone in your life.

I originally set up my iPhone with the most basic of info, something I do whenever I get a new phone, listing a drug allergy (penicillin) and my ICE (In Case of Emergency) contact.

Then I had a heart attack caused by a rare condition. I was put on blood thinners and other prescription drugs. Doctors at the Mayo Clinic found a second rare condition that may have contributed to my heart event. This is what my health screen looks like now:

What my phone says.
See end note for translation, if you like that kind of thing.

The conditions are not common names, and as much as my family and friends have heard me talk about myself (sidenote: thanks for putting up with my excessive/obsessive artery talk), I don’t know that any one of them would be able to rattle off what “SCAD” stands for or “fibromuscular dysplasia,” so I’ve assured them it’s on my phone. I also list my husband’s name and number, and that I’m an organ donor. Sure, my license says “organ donor,” but I’m more likely to have my phone with me than my wallet if I’m out on a walk or at the gym.

I hope that right about now you’re looking at your phone to see if you have the ability to do this. (You do.) On an iPhone, look  for the red heart on a white background, the same built-in app where you track your mileage. Open it up and choose Medical ID. There are prompts for medical conditions, medical notes, allergies & reactions, medications, and emergency contact information. On an Android, go to the “Users” section in Settings and edit away.

I’m pretty sure that whatever directions I offer here will be outdated soon, so do a quick Google search for your phone type and “access by first responders” and you’ll get the tips you need. I don’t need to hear your step by step, or how my directions were incomplete, or about your Apple Watch. But I do need you to update your app or setting. I need you to do that now.

Thank you. I love you and want you to stay alive.

Translation for what my phone says:

“MI” – myocardial infarction (heart attack)
“Spontaneous Coronary Artery Dissection” = a tear in the artery wall that can cause an MI.
“Fibromuscular Dysplasia” = a disease in blood vessels; imagine a blood vessel that looks like a string of beads, instead of being smooth. Mine is in my carotid arteries.
“Carvedilol” = a beta blocker that does a bunch of great, life-saving things; it also makes me feel like I’m walking through Jello all day, every day.

Three months ago I had a heart attack. And since the symptoms of a heart attack are different for women, and since the kind I had can strike people with no markers of heart disease, I’ve decided to tell my story. And because I love to name drop, I’ll do some of that along the way because I was with authors I love that night.

I was at Queen Anne Book Company in Seattle, surrounded by friends. Authors Kirby Larson, Kristen Kittscher and I had just finished a presentation on our middle grade mysteries when in a flash everything changed for me. I had full-on flu-like symptoms, unlike anything I’d ever experienced before. I whispered to Kirby that I didn’t feel well and needed to leave; she took one look at me and tried to intervene, asking to take me home or to urgent care. Something was off. She told me she was worried, and that I looked “ashen.” (That specific word comes into play later.) I assured her I’d be fine. My friend Sara Nickerson looked concerned and touched her chest, a movement that triggered something in my brain. 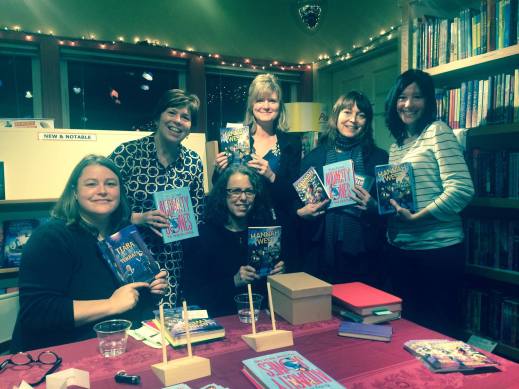 I am having a heart attack in this photo. But look at who I’m surrounded by — friends and writers I love. Kristen Kittscher, Kirby Larson, Suzanne Selfors, Sara Nickerson, Jennifer Longo. I love these women!

As I headed to my car, a pressure came into my chest. Weird, but not too bad. I thought about what Kirby had said, how Sara had touched her heart. I tried to stop the crazy thoughts in my head that maybe I was heading toward a heart attack. I thought about going back to the store, knowing that anyone in there would help me. My dear friend Jane (friends since college) had just left the bookstore and lives nearby. I knew I didn’t have to be alone. But I decided to drive home anyway.

A few minutes into the drive, stabbing pain in my back came and I knew precisely what it was (thank you PBS documentary on women and heart disease!). Still, because I’m a dummy, I drove all the way home, threw up and then the pain went down my left arm to my little finger.

I walked inside and asked Kevin, my husband, to take me to the ER. He asked no questions, just jumped up and grabbed his keys. I remember saying something like I might be embarrassed if it was nothing, but that I’d rather be embarrassed than dead. He just said: “We’re going.”

My heart attack was not the Hollywood kind where someone (almost always a man) grabs his chest and doubles over in pain. Every one of my symptoms was one that would stand on its own as a possible heart attack; all of my symptoms are ones that could be, and often are, dismissed by healthcare professionals, let alone the people having them. When I walked into the ER, I listed them quickly and specifically. If you are a woman (or you know one), please take note of my heart attack symptoms:

All were noted, the word “ASHEN” in all caps, and I was taken in immediately. It was confirmed that I was having a heart attack, or, as I now call it, a myocardial infarction (MI). Just a couple months after a physical where I’d had a normal ECG and full blood work, with cholesterol scores so good I could have framed them. I exercise, eat reasonably well, don’t smoke, I’m not THAT old, and I was having a heart attack.

The heart attack (MI) was caused by a tear in an artery wall, which is called a spontaneous coronary artery dissection, or SCAD. SCADs occur predominantly in women who are fit and healthy, with an average age of 42. We don’t know why they happen, and I’m not sure there’s anything I could have done to prevent it from happening. The first articles I read kept referring to SCAD as a rare disease. The SCAD Research Alliance says this: “SCAD isn’t rare. It’s rare to meet a survivor.”

My friend Jane took this photo just minutes before my heart attack. I still feel like the person here, although my new normal is definitely different.

I’ve met some wonderful women through a SCAD Survivors group and I’m thankful every day for them and the research now being done at the Mayo Clinic. SCAD survivors share information on how hard the first year is, the fear of recurrence (a real fear, as it happens frequently), anxiety, making progress in cardiac rehabilitation, and finding a “new normal.”

I am incredibly grateful to my friend Kirby because her concern and her words got me to the point where I knew this was real. This was big. Ashen is an unusual color for me unless, as it turns out, my heart is not getting enough oxygen.

Heaps of thanks to my family and to all my friends, and those who, when they asked what they could do, came when I said the dog really could use a walk, or two, every day for a few weeks. Thank you.

I write middle grade novels (including the Hannah West mystery series). My day job, which I love: librarian at Seattle Public Library.

Other places I blog